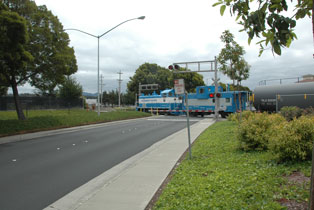 
The Officer Bradley A. Moody Memorial Underpass project entails the construction of a roadway undercrossing in place of the existing grade crossing on Marina Bay Parkway between Regatta Boulevard and Meeker Avenue. With increased rail activity in recent years and forecasts for growth in the future, long trains are morefrequently traversing Richmond grade crossings. In theSouth Richmond Shoreline area, low maximum train speeds result in traffic blockages for 20-30 minutes at a time with no alternateaccess, as all north-south ingress and egress to this areais impacted at closely-spaced grade crossings.

Agency staff applied for and secured an $18.975M grant from the Proposition 1B Trade Corridor Improvement Fund (TCIF). Additional funding assistance is provided by Measure J transportation sales tax and developer fees resulting from recent residential projects in the area.

A design contract was awarded to BKF Engineers to complete preliminary and final engineeringof the underpass, and design was completed in 2011. The project is anticipated to take approximately 27 months to construct.

The California Supreme Court's decision to uphold AB 1X 26 dissolved all redevelopment agencies statewide, including the Richmond Community Redevelopment Agency. The Successor Agency to the Richmond Community Redevelopment Agency ("Successor Agency") is now only permitted to expend funds to pay for projects, loans, and other activities for which the former agency had an agreement or contract in place prior to the enactment of AB 1X 26. These preexisting commitments are called "enforceable obligations".

The Successor Agency included the Project on its Recognized Obligation Payment Schedule ("ROPS"), and the local Oversight Board created by AB 1X 26 also approved the ROPS. Per the requirements of AB 1X 26, the ROPS was forwarded to the Department of Finance ("DOF"), which has the ability to review and determine whether any items are not enforceable obligations.

From May 2012 until September 2012, Successor Agency staff worked with community members and the offices of Assemblymember Nancy Skinner and Senator Loni Hancock to urge DOF to reconsider their denial of the project. On September 17, 2012 the DOF issued a letter reversing their position, specifically recognizing the Underpass project as an obligation of the former Agency. In September 2012, the California Transportation Commission ("CTC") approved a $4.23m grant for the Project from the Highway-Rail Crossing Safety Account ("HRCSA"). Combined, these two actions restored the funding plan for the Project and allow the Successor Agency to re-advertise the Project for bids.

The CTC will allocate (i.e., an action that provides access to the funding) the HRCSA grant at its March 2013 meeting. This allocation must take place prior to contract award.

On Thursday, August 23, 2010, advisory ballots were mailed to residents, businesses and property owners in the South Richmond shoreline area to gauge the neighborhood's preferred design and implementation option for the project.

Option A included minimum aesthetic upgrades for replacement landscaping and 36 months of construction duration, with Marina Bay Parkway open to traffic for the duration of construction.