About the Art Site

A relatively new figurative replica of a former statue located on the same site until l940.

It is assumed the original was sacrificed to the war effort, but others say it may have blown over in a storm.

Modified from the original as it appeared in historical photos, the statue is intended to reflect the sensibility of turn of the century art which would fit with the architecture of the immediate surroundings.

But, sensitive to the changed attitudes toward Native Americans, the statue's plaque explains the Indian statue is not just a replica, but a memorial to the Indians of the area. 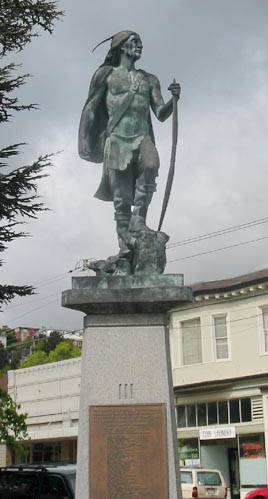