A Century of Service

The Richmond Police Department celebrated a century of service to our community in 2009. In the weeks and months leading up to our May 16th centennial celebration Captain Allwyn Brown conducted extensive research into RPD archives to learn more about the history and tradition of our department.  The following are excerpts from his research:

In 1901 San Pablo Township ranchers and businessmen elected Frank Moitoza to serve as Constable.  Harry Stevens was hired in 1905 to serve as the city's first night watchman and concurrently the city's first policeman.  In 1906 the chore was turned over to A.B. Crump.  H.W. Livingstone was appointed City Marshal, Superintendant of Streets, Tax Collector and Pound Master by Richmond's Board of Trustees at their first meeting following incorporation in August 1905.  He was the first person to hold a position comparable to that of Chief of Police.  Livingston was succeeded in the position April 1906 by J.H. Gregory, who served until July 1909 when the city charter became effective.  The State of California ratified and adopted the City Charter March 4, 1909, to be effective July 1. 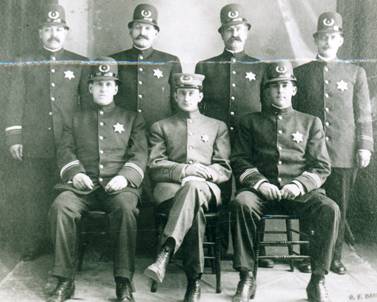 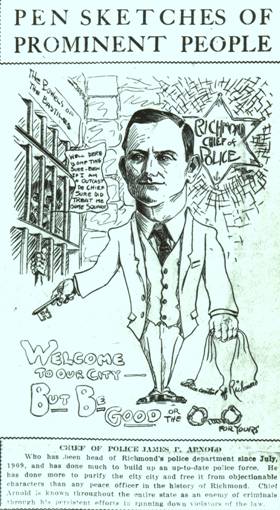 Richmond had police protection during the first decade of the 1900's, but it was not until the adoption of the city charter in 1909 that the first Chief of Police was appointed. J.P. Arnold (center in photo above), was sworn into office July 6, 1909.

A cartoon sketch depicting Chief Arnold created during the time period suggests reverent support and admiration for the chief, as interpreted by the text that accompanied the drawing: "CHIEF OF POLICE JAMES P. ARNOLD Who has been head of Richmond's police department since July, 1909,
and has done much to build up an up-to-date police force.  He has done more to purify the city and free it from objectionable characters
than any peace officer in the history of Richmond.  Chief Arnold is known throughout the entire state as an enemy of criminals
through his persistent efforts in running down violators of the law."


The photo at the right shows the original police station which was located in downtown Point Richmond.  The police and fire departments operated out of the same building.  The original building still remains as a historical landmark (the current fire station is directly across the street from the original).

One time period in RPD history that would offer particularly tough challenges amid rapidly changing conditions came during the 1940's. World War II was in full swing and Richmond experienced a population boom that accompanied the Liberty and Victory shipbuilding effort underway in the San Francisco Bay Area.  Many newcomers were drawn to Richmond with employment created by the Kaiser-Richmond Shipyards, defense-related industries and an assortment of offshoot opportunities generated by the war effort.  An escalating crime rate accompanied the Richmond wartime boom and city officials petitioned the federal government for increased funding to augment the police force.

In April 1943 Richmond Police Chief L. Emmett Jones testified before a federal committee that his force of 54 "men" included 19 added out of necessity in the previous year "to help maintain law and order in the community."  In the summer of 1943 Richmond received federal funding to hire 75 more police officers - yes, seventy-five additional police officers. 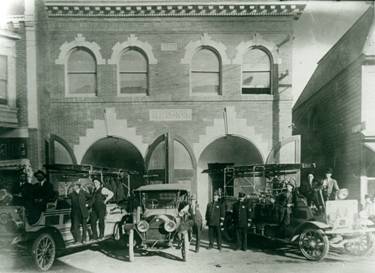 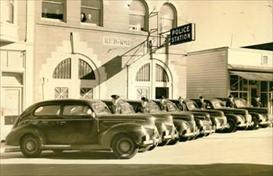 With a much larger force, and with the approval of civic leaders and elected officials, Richmond PD undertook a stringent law enforcement campaign.  Arrestees for public drunkenness and drunk driving faced stiff fines.  "We hit them heavy. They can behave or pay" explained City Manager James McVittie.  Serious crime in Richmond began to decline in 1944.

The RPD officers of the 1940's characterized the "hardened lawbreakers" of their era as "drunks, knifers, rapers, attackers, hop-heads, harlots, wife-beaters and murderers."  RPD Officers were charged with the dual responsibilities of combating crime and upholding "custom and matters of taste."  This meant in practical terms that in addition to sweeping the streets of "drunks and other undesirables," police officers also routinely cleaned up broken glass from downtown MacDonald Avenue sidewalks. Some traditions and responsibilities have obviously evolved over time. 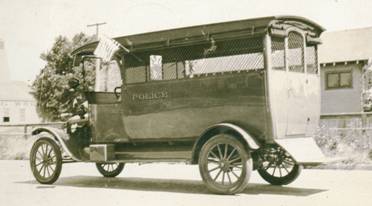 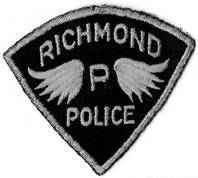 The patch at the left was worn on Richmond Police uniforms beginning in the 1940's.  (Notice the earliest photos show the officers wearing no patches at all on their uniform sleeves.) 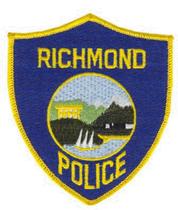 This is the newer uniform patch worn by RPD officers for the past few decades. The city depicted in the center is typically thought to be Richmond ... water, a boat, a train, a building. But wait! We don't have snow-capped mountains in Richmond!


Lewis Emmett Jones served as Richmond's fifth police chief.  He was appointed to the department in 1914 and contributed 33 years of service.  He assumed the duties of police chief May 15, 1933 and served in that capacity until spring 1947, when he retired.  Jones appears in this 1922 department photograph, taken in front of the original police headquarters in Point Richmond.  Jones is third from the left.

Although James P. Arnold was the first Chief of Police appointed under the charter, he certainly wasn't the last.  Once he took office on July 6, 1909 the Richmond Police Department was officially "born."  Our department has produced a distinguished list of proud and accomplished law enforcement leaders. 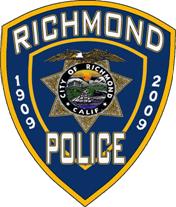 Ten dedicated Richmond Police Officers have made the ultimate sacrifice during our century of service.

The RPD fallen are:

Officer Agnew was killed by an automobile.

Officer Nugent was shot and killed during the response to a burglar alarm by the owner of the business he was checking.

Lieutenant Cutshall suffered a fatal heart attack while handling a bar fight. He had just arrested six men and placed them in the paddy wagon when he collapsed.

Officer Ross was shot to death with his own service weapon during a scuffle with two 19-year olds he was attempting to arrest.

Officer Cariker was killed in a solo vehicle accident while responding to cover other officers on a man-with-a-gun call when his patrol car left the roadway and struck a utility pole.

Officers Fuller and Whitty were killed when the RPD airplane they were operating collided with another aircraft and crashed during a drug surveillance operation.

Officers Garcia and Haynes were shot and killed by an enraged husband while on a domestic disturbance call. The shooter committed suicide shortly after firing the fatal bullets.

Officer Moody succumbed to traumatic injuries suffered in a solo vehicle accident three days after his patrol car struck a utility pole while responding to cover other officers on scene at a felony assault call.

Sergeant Thomas was exposed to the COVID-19 virus on-duty and ultimately succumbed to the virus.

We honor the devoted service and sacrifice of these Richmond officers and pay lasting tribute to their memories through resolute attention to duty and our continuous efforts to elevate the police profession. 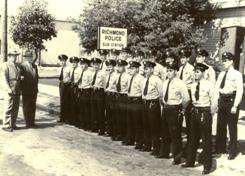 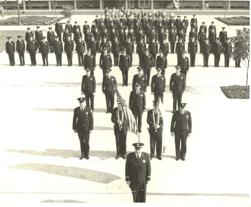 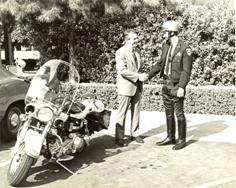 
Commemorating 100 years of service.
"Acknowledging the Past. Perfecting the Present. Poised for the Future."

Watch a short video of the RPD Centennial Celebration here.

The slide show below includes images from the RPD Centennial Celebration
at the Richmond Marina on May 15, 2009.
The images are courtesy of Ellen Gailing Photography.