The Belgian Malinois breed and Dutch Shepherd breed has worked well with the Richmond Police Department Canine Unit. Both breeds have a long career span; they are very athletic, even-tempered and have a high play drive.

The primary function of the Canine Unit is to help the in searching for and tracking of felony suspects who have fled the scene of a crime, searching for evidence, narcotics detection and occasionally,  and to conduct searches for lost children and/or elderly people. 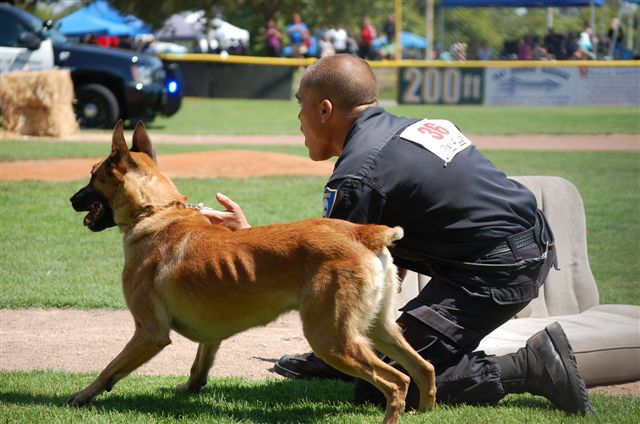 If you are interested in arranging a canine demonstration for your group, please email Sgt. J. Vigil to make your request.

On October 4, 2008 K-9 Handler Brad Moody was involved in a collision which ended his watch.  Brad will be sorely missed among his family, friends, co-workers, and especially his peers in the K-9 Corps.  Brad’s partner, Rico, lived with Brad’s family until he passed in 2010.

A fund to benefit the Moody family has been established at Mechanics Bank.  Donations may be made to the “The Memorial Fund for Officer Brad Moody” and dropped off at any Mechanics Bank location.  Visit the Brad Moody Memorial webpage.

K9 Handlers and their K9 Partners